Here’s the latest Newsletter with details of this term’s conferences for teachers and pupils in Herefordshire primary schools: 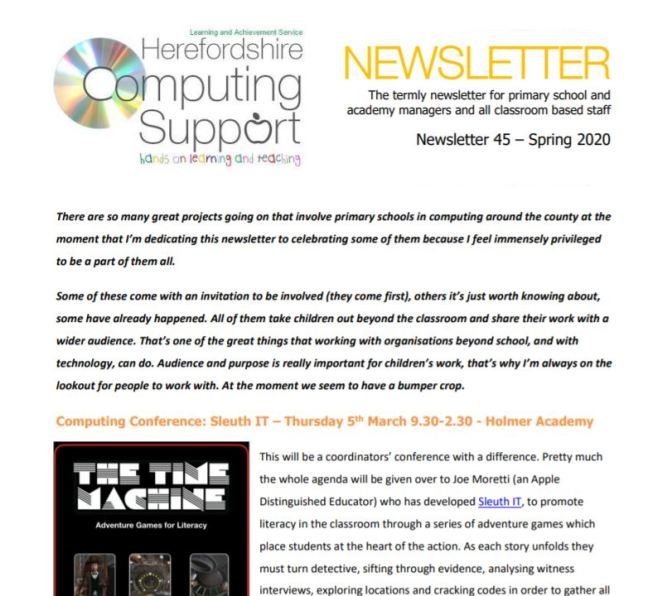 Christmas is a time when many new digital devices will appear in homes so now is a good time to remind children about how to use them safely and wisely. Here are some new activities fro CEOP:

You can check out their blog here 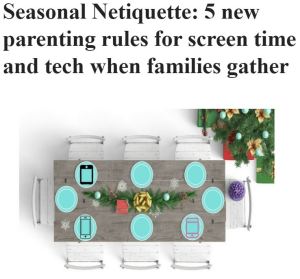 This is the last one, folks. Have a good end to the term, a great Christmas and an enjoyable break.

The 2015 John Lewis ad is a bit of a classic. I think there is a whole raft of possibilities with But here’s one idea:

Get the children to snapshot some carefully selected stills of the Man on the moon looking down to earth (press the home button and the power button together to do this).

Get them to do a bit of research into parts of the world where people don’t have such a great time at Christmas and take some snapshots of the ones that particularly interest them (charity sites might be good, Children in need …)

Use iMovie  Book Creator (have you seen the great comic book templates?), Pic Collage, Shadow Puppet, Pupet Pals … or any creative app to make their own piece about looking after people at Christmas.

Of course you will need to talk to the children about making sure that it’s OK to use the images they select.

I did some of this with a year 5 class in 2015 and on Christmas day afternoon some of the children were blogging to ask for help as they continued it.

There are things you can do with this year’s John Lewis ad, Excitable Edgar, too and it’s worth checking out their website

Activity 11 (Y5+6): Promote your Christmas production with an iMovie trailer

An excellent feature of iMovie and an easy way into it is to use the trailer feature.

There is a range of templates to choose from and the children add their own pictures (or very short video) and a number of powerful pieces of text to these to create a thoroughly professional piece with which they will be very proud.

Text style, music and structure are locked into the template so it’s important to get that choice right at the outset. If you have the time (an I appreciate that you probably don’t this week) t’s also good to get children to storyboard on paper first before they hit the app; this blog has some splendid printable storyboard planning sheets that you can use with the children first, as well as further notes of explanation about the templates. 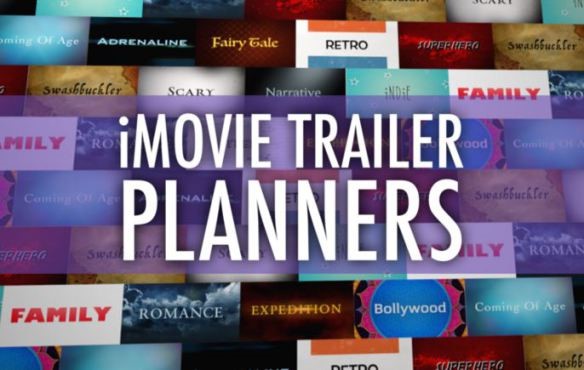 They will want to share what they’ve done beyond school. How about creating a trailer for your school production and sharing it online.

The Aldi 2016 Christmas ad (which you’ll still find with this link) is a great animation that could easily be copied in a simpler style by using Puppet Pals. It uses Clement Clarke Moore’s poem The Night Before Christmas so great for a link to Literacy by getting the children to rework the poem themselves. 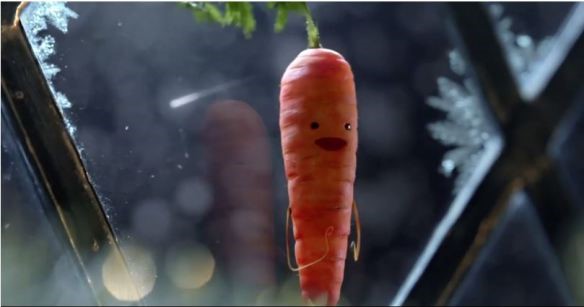 They could choose their own Christmas character (or use the Kevin the Carrot idea from the ad), photograph their main character then design or search for their own backgrounds. Puppet Pals is a really easy way to put the whole thing together once they have written and rehearsed their poem.

The last time I looked, the Aldi stores had large quantities of Kevin the Carrot and his friends in the middle aisle so plenty of green screen scope again.

Here’s one for Reception. If you don’t have Puppet Pals on your iPads in Early Years you should get it! There is a free version that’s not really worth having – you need to pay for the paid one – Puppet Palls Director’s Pass – (£3.99). One of the great things about the paid app is that children can take or source their own pictures as puppets and backgrounds; thereby offering massive potential. However, on this occasion there are some good ready made ones that you can download (only if you have the paid for app) for Christmas. 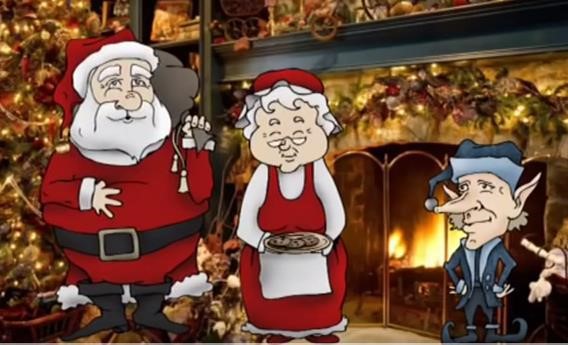 Select you puppets, select backgrounds, narrate your story as you move the puppets around the stage, record and publish. Some examples

Continuing the theme of Christmas ads, John Lewis (and Waitrose) have done it again with their delightful Excitable Edgar ad. If you haven’t seen it yet, you should watch it now.

As with last year’s Moz (also worth another look as most of these ideas hold good for that too), there is no dialogue in this advert which makes it ideal for linking media literacy with literacy. It’s really rich in visual clues especially through the expressions on the characters’ faces (real and animated) which give real insight into their thoughts and feelings.

You could start by “boxing it up” again, break it down into sections, how does the story build. Snapshot key moments from the film (either as a class on the whiteboard or in pairs on the children’s iPads). As a class have a go at constructing the narrative (use the pictures for vocabulary). Book Creator would be great for building a story book from the pictures, no sound this time just a written narrative.

I could go on, but I won’t because as I sat down to write this this morning an email dropped into my inbox: Mr P (Lee Parkinson) has already done it in what looks like considerable detail. You can get his comprehension questions for free via the link above and sacrificing your email address. Subscribe to his resources and there is enough planning to keep you going with a unit of work lasting several weeks. The suggestions are there for free.

I would suggest that you then go along to John Lewis and buy the dragon toy so that you can bring Edgar into your school using green screen in iMovie, but as I expected they are sold out. We’ll just have to be quicker next year!

Christmas ads are always great for classroom projects. This year the Church of England has entered the stage with the release of its Christmas Ad this weekend #FollowTheStar.

This is an easily reproducible format that you might like to copy as a school / class. You could begin by “boxing up” theirs. Break it down into sections, consider what techniques are used, how are the shots framed, where is the camera (angle), how is sound used?

Then plan your own: what carol would your children use? How would they illustrate each line? How would they use your school building / your church? Could you film the children performing the carol as the backing track?

Children could easily work in groups on sections of the film and then airdrop to one iPad so that a group (perhaps your digital leaders) could edit up the film. Younger children could use Book Creator to do this page by page the use the combine books feature and export as a movie.

Go on … give it a go, and if you do please make sure your share the result with me – and even the wider world by tweeting with the C of E’s hashtag #FollowTheStar

This is a scaled down version of the Scratch programming from Y4 at Credenhill on Tuesday and I’m grateful to Y2 & 3 children @BosburyPrimary for being the guinea pigs this morning. 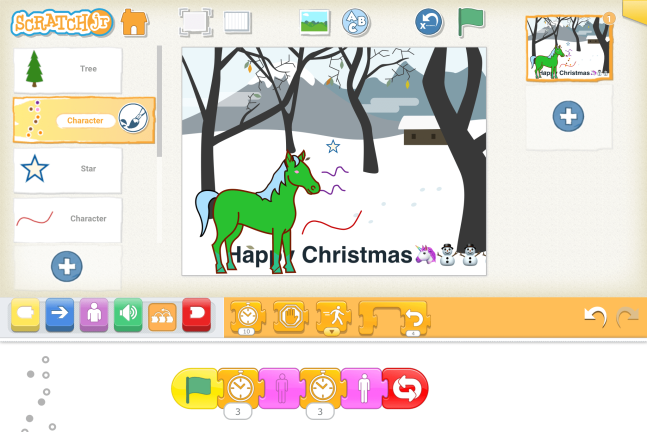 Like it’s big brother, Scratch Jr is not rich in festive content and as you can’t easily import artwork to become sprites we focused on the one winter background and Christmas (ish) tree. We made flashing lights (show / hide in a repeat loop – see above) added a bit of text, recorded the class singing and hey presto! We also experimented with different start conditions (green flag, tap, and even send and receive messages between sprites) but this class have done quite a bit of coding in the past and are good at it.

It’s also not easy to share work created in Scratch Jr, the only options being air drop and email (requiring an email account to send from and Scratch Jr on the receiving device) so a bit of fiddling around might be needed. At Bosbury we turned them into video format using the screen recording tool (needs to be turned on in Settings – Control Centre – Customize controls) but I’ve probably lost you by now and it is Friday.

Enjoy these two by Avena (featuring a Christmas Tree eating green horse)  and Emily who said I could share them with you.

Here’s an idea that has proved hugely popular with the children at the Pupil Digital Leaders conferences for a couple of years. If you have a team of them in your school they may already have worked with classes on this activity; they’ve certainly sent me many Christmas Trees. 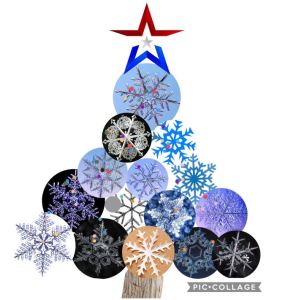 The original planning is here but you may find these three sheets I adapted from it more helpful: